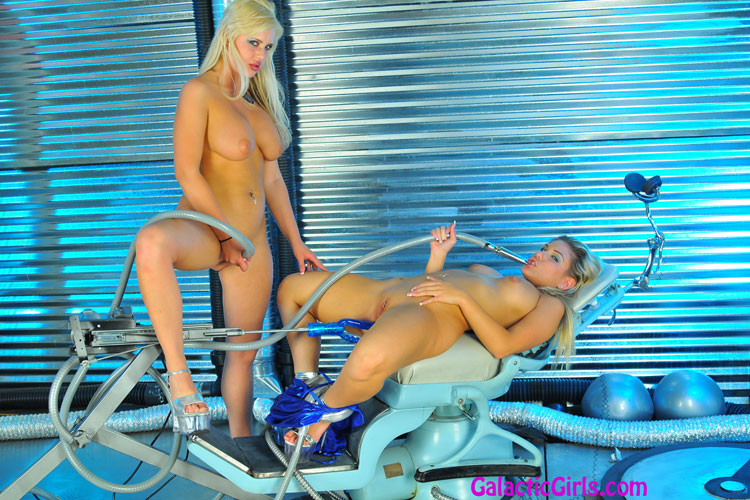 The leader was borne and was leading the Cybourgians toward war. Te prophesy had read, that the leader would be borne again, and when he is, he will lead the Cybourgians to victory over their planet and the universe. Except, the prophesy told of a queen, who’s powers out matched the leader that would bring destruction to the Cybourgian race, ending their civilization forever. Following the command of the Leader, Andi Anderson captures yet another Galactic Girl to make her into a Cybougian Warrior. She uses the Extractor Machine to remove the Galactic Girl DNA and insert her own fluids. In the process she must use an extraction on herself and transfer the fluids into Aubrey Addams pussy. Under the control of the mind machine Aubrey Addams cannot resist. She gives way to the Cybourgian and lets her experiment on her naked body. The sex machine does its work and slowly the probes remove enough DNA to insert the Cybourgian fluid. It appears the process is complete and Aubrey has become a Cybourgian Warrior. The loss of Galactic Girls makes the others grow weaker and they must hurry to make new Galactic Warriors to fight the Cybourgians. How can this be done? Will the Galactic Girls survive? Stay tuned or the next episode…The HD video and super high resolution photo gallery are posted below. Enjoy! Watch Trailer! 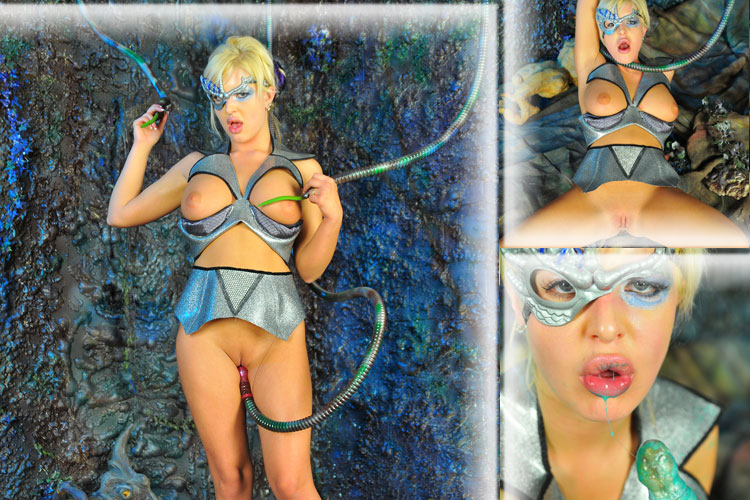 Andi Anderson of the Cybourgian race had been responsible for the capture many Galactic Girls for the building of their Army. With each transformation she was loosing more and more of her sexual powers. She began to think mutiny, and wondered why she must sacrifice her sexuality to build the “leaders” army. When first invading the planet, she had heard rumors of a vicious cybernetic cave that was charged with mysterious sexual energies. The cave had long been forgotten and became only a legend, but even so, the Galactic Girls who did know about it dared not set foot. No female was strong enough to endure the powers of the cave except for the queen of Pussea herself. Until now. Andi went on her quest to find the alien cave and all of its wonders. When she had finally discovered the opening she was nearly spent. Clinging on to her last drop of energy Andi entered and began to refuel. The bio arms took to her kindly and Andi to them. She knew that to get her energy she must please the robots as much as they pleased her. Moving around her sensual body the puppets recharged her energy. Her brain, her large perfect breasts and her pussy were fully powered. But Andi wanted more, she became greedy for the alien powers and wanted to become superior over the Cybourgians and their baby leader. She begged the puppets for more and more until they let out their lethal blue cum. Andi’s sexual energy burst out of control as she began masturbating harder and harder and something began happening to her clit. She was fascinated and could not stop the rubbing, for it appeared to her that it was growing in size. Unable to stop for a moment Andi saw the change that was happening to her, she had developed a penis of her own and she was eager to please it for it had a life of its own it seemed. When her sexual frenzy was finished Andi felt on fire, she was a lone species now, superior to anything on the planet of Pueesa… her penis would now give her extraordinary powers. Andi knew the possibilities; she would be able to implant her own seed into unsuspecting females, who will lay her eggs. Stay tuned to GalacticGirls.com to see when happens next.The HD video and high resolution image gallery are posted below. Enjoy! Watch Trailer! 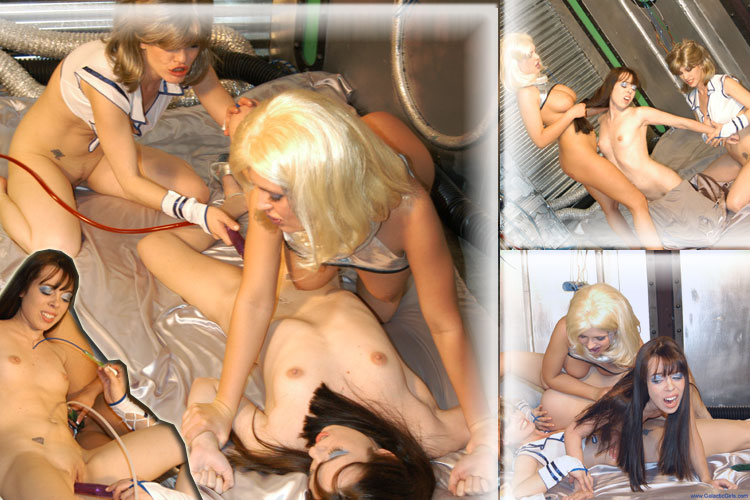 The two lesbian warriors Andi and Kym have captured the sweet tinny Queen of Pussea Erin. The strong big boob galactic warriors were thinking that the skinny Queen will give up easily to their lesbian attack. Kym was able to probe the queen trying to inject the mind controlling fluid from the DNA machine, when the powerful Queen released a shockwave braking the alien sex machine into pieces. Scared that Erin will overwhelm them the lesbian traitors called the alien baby mind for help. After a lot of physical and spiritual fight the Queen gave up and let the kinky fetish lesbians probe her tiny ass and pussy. After a while Erin began liking the SciFi group lesbian sex…these were the last days of the Galactic Girl presence on planet Pussea as after the fall of the Queen the Trimon invaders took power. Stay tuned to find out what happened to the enslaved galactic babes.The HD video and high resolution picture gallery are posted below. Enjoy! Watch Trailer! 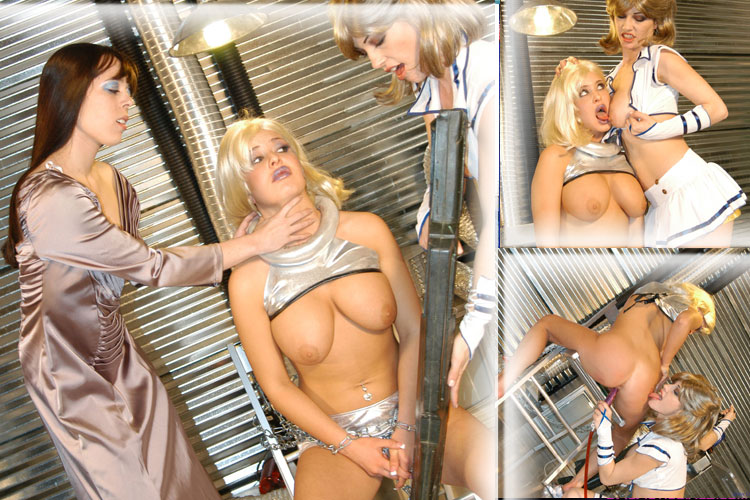