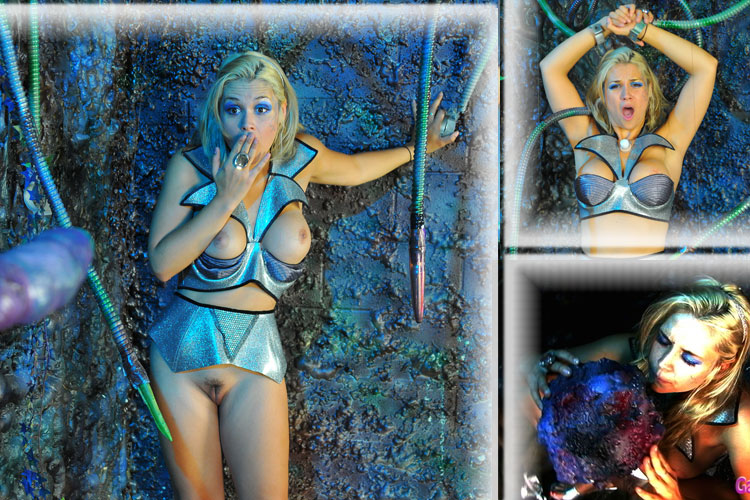 Sarah Vandella was captured and injected with a Trimon Egg. She was probed and experimented upon but each implantation failed. There was a missing element, Galactic Juice. After the capture of Sindee Jennings, the juice was finally collected and inserted into Sarah Vandella. Sarah was now pregnant with the Egg that would carry the first Trimon Alien in 80 years. The last step in the process was to put her under the control of the alien puppets so that its sexual fluids could nourish Sarah from inside. Not remembering what has happened to her, or how she got there, Sarah felt as though she was loosing control of herself and her mind. Entranced she began to masturbate with the large moving puppets and let them please her pussy in ways she had never imagined. Once under the control if the cave she was released from her restraints. As the busty blonde reached orgasm, she felt something growing in her stomach and in moments she has lain a large Trimon Egg. For the egg to survive it must be put in total isolation in the puppet cave so that the cave may feed it when it is born. Stay tuned to Galacticgirls.com to see the birth of the first Trimon female. The HD video and super high resolution pictures are posted below. Enjoy! Watch Trailer!