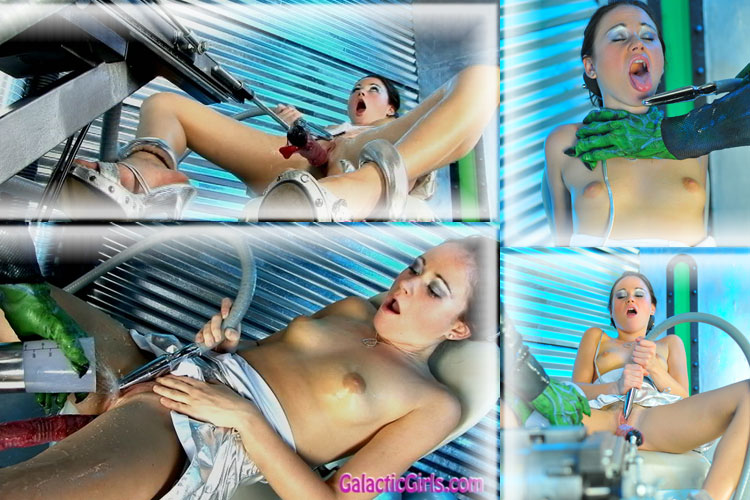 Small boobs teen Sindee Jennings woke up from what she thought was a nap and found herself in a chair. The chair had devices attached to it, strange screws and probes on robotic arms. Being bound at the legs, Sindee had no chance of escape. She awoke to find an alien creature in front of her already in the process of undressing her. The machine took over her mind and she had to produce reproductive fluid for the Trimon Alien. The Trimons heard about the Cybourgians evil plan to create an army and extinguish all species but their own. They were determined to stop them, and with that they must produce enough human sex fluids to make alien babies. Sindee Jennings was chosen for the reproduction as she was able to produce large quantities of the precious fluids instantly when given proper stimulation. As the machine started to power up Sindee knew that her mission was to save the nearly extinct Trimons. As the alien machine gave her immense pleasure moving faster and faster, she released a huge amount of reproductive juice squirting all over the alien and his machine. She then went for round 2 knowing that she must save the aliens at all cost. When the Sci-Fi teen was completely drained the aliens used the fluid to impregnate a defenseless Galactic Girl that they captured the same day. They inserted the egg fertilized by the human fluid deep inside her. However, the only way to bring life to the egg, was to put her in the swampy alien cave. Only with the juices of the bio-arms, would the process finally be complete and an alien child would be born. Stay tuned to Galacticgils.com to see what happens in the Alien Cave. The HD video and large high resolution photo gallery are posted below. Enjoy! Watch Trailer!