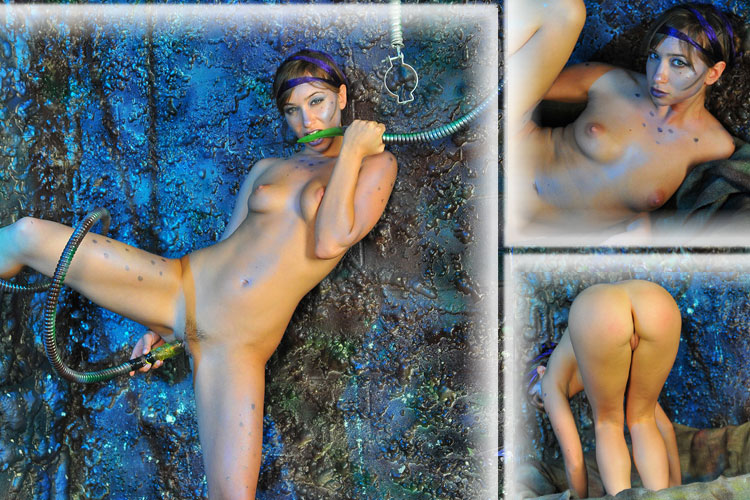 The Egg sat in the swamp for six months growing and maturing. Inside was the first female to be born of the Timon race for over 80 years. Since the death of the Timon planet, the aliens were not able reproduce leaving the race almost extinct. With the help of the pussy fluid of Cindy Jennings they were finally able to artificially fertilize one female egg. It was time for the egg to hatch and with no one watching over it, Luisa Lanewood the first Trimon female emerged from her egg cocoon. She was a young alien desperately in need of sex and stimulation otherwise she would die. As she climbed into the pool she struggled with the puppets and finally found one to fit her virgin alien pussy. As she masturbated and found her new wild alien sexuality, the sexy teen gained alien powers throughout her body. It would be months before she could leave the cave as a full adult alien. The hot ass model would have to feed of the puppets sexual powers until she was completely ready to enter the world. Upon her climax Luisa received the cum of life from the cave puppet to help her grow into alienhood. Stay tuned to see the next episode of how the aliens continue their breeding attempts to restore the superiority of their breed on Galacticgirls.com! The HD video and high resolution photo gallery are posted below. Enjoy! Watch Trailer!